The Race | Thriller | Vancouver, BC 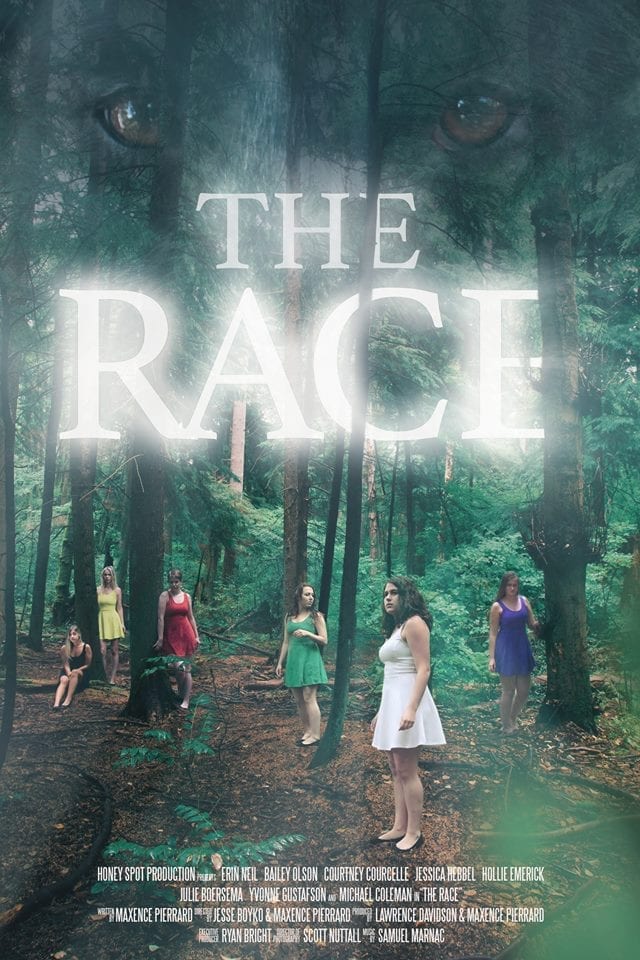 The Race A film by Maxence Pierrard and Jesse Boyko. A dense boreal forest stretches as far as the eye can see. The surreal silence of the looming trees is broken by the sound of footsteps, sprinting through the foliage. It’s a young brunette in a pure white dress, running determinedly. Another girl, nearby, with an angry determination is also moving at full speed. She wears the same dress, only colored forest green. The girl in white stops a moment. The girl in green strikes, however it was not the girl in white she chased. A new young lady, a scared, shocked, innocent creature, whose yellow dress is now being stained by her blood, coughs and looks painfully down on her wound. She’s been impaled by a sharp, low branch. She fearfully asks her attacker if this was the path to victory. The girl in green lustfully takes in the death, and says her goodbye. Somewhere in the forest, the white dress woman pauses a moment.

A dog cuts a path through the bushes, and is gone again, as quick as that. She takes another needed lungful of air, and chases after. Too late, the dog is gone. As the rain begins to fall, her search brings up a sad stranger in a black dress. She’s lost the dog, and going forward is pointless. The girl in white dress assures her there’s multiple dogs, and they each have their own to find. She offers help, and gains a reluctant partner. Together, as they search for their dogs, they uncover someone in royal purple, hiding in the bushes. They offer assistance, but this new girl remains wary. She saw what Green did, and she warns them. “This is a race.”

This film, written by Maxence Pierrard, and directed by him and Jesse Boyko, is a twisting and turning look into a person’s natural instinct to survive at all costs, unknowingly moving towards uncertainty with a bitter determination. It seeks to showcase a duality in showing the beauty and horror within each of us, and to remind us that we should question every truth we know. “It is hard to talk about a thriller with a twist ending without giving it away,” Maxence explains, “but this script started as a creative exercise about bargaining with oneself. It evolved into something far more about life and death.

I want people walking away from this film with an uneasy feeling that they understood what was being said, and I hope that understanding creeps them out.” The Race is currently beginning its festival circuit, and is looking to thrill new audiences from around the globe.